New arrivals & those with homes this year.

It has been so very busy already this year and we are just in the first day of spring 2017. So far we have had six new arrivals to the ranch, we have fostered or adopted out eight and we are in the process of rescuing six very young mini mules from a killpen in Bastrop, Louisiana.

Let's introduce you to those we have helped since the first of the year and show you a picture of each. Beautiful Hope, who sadly passed the day after her she got here. The first horse that ever arrived at the rescue so badly starved that her body was already shutting down and all we could do was comfort, not save her.  RIP Hope. 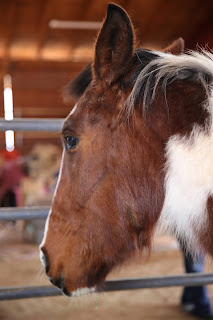 January 14th,  we picked a weanling named Twinkle and she spent a month with our foster Ginny (who also has Dann Sister horse Remi) before coming to the rescue in February.  We housed a horse in March for a family who live in Tucson and needed a safe overnight place for him and they fell in love with Twinkle at first sight.  Guess who was in their trailer the next morning and now lives with the Nieman family in Tucson?

Also in January we were asked to take in an 27 year old mare for a family having a rough time and unable to afford to keep her. On February 2, we transported Copper Rose to the rescue and she is settling in nicely with the oldsters. She has put on a few pounds since her arrival. She is still rideable so we would consider finding her an adoptive home.  We are pleased that we have been in contact with her prior owners and they are following us now too.
Two weeks later we made room for Paublo a two year old donkey. His family loved him, but their horses didn't and constantly picked on him. He arrived on 2/19/17 and fit right in with our donkeys, Ricci and Ramey. Just this past weekend he went to live with Holly so he could keep her elderly horse named Odessey company.  They live about 15 miles away and the boys are doing good. 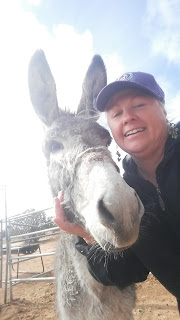 A few days after his arrival Lary and I made a turn around trip all the way to Yuma, AZ to pick up Stella and Jenny, two mules who needed a new home. We were so tickled when our neighbors offered to give them a forever home. The girls spent the night with us and the next day we delivered them to Darlene and Judee who are over the moon in love with them.

Additional adoptees include Bambi, one of the mini donkeys who arrived last summer and went to live with Jen & David here in Snowflake.  Red, the early 20's mare that has been with us since 2015 was adopted by our hay provider, Bill & Thelma also in Snowflake.  Lastly, two of the donkeys that came to us in a group of eight in 2015, Sam & Elliott, were adopted by Lauri and Robin who reside in Snowflake. We are excited to have so many of our equine in local homes.

We still have Cinnabon at Aliki's for training. We brought her back from California last December when her owner moved out of state and could not keep her. She needed a 90 day layup to heal from lameness pain she had when we got her. We did a thorough vet exam, x-rays and two chiropractic visits. She received Previcox to help with swelling and pain for 60 days and next week will have another visit with the vet. She has been able to do ground work, but nothing under saddle. 2017 we have been tapped really hard with medical bills for her and Missy.  This is Cinnabon, we first rescued her as a weanling from the Fallon Feedlot in 2012. 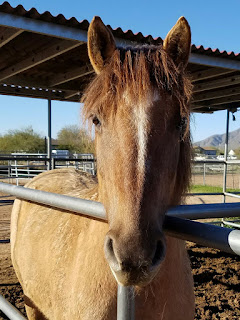 As you can see there have been lots of good things happening at the rescue as we have been able to help many all ready this year and add new adopters and fosters to the EqWBR family.

We can't thank you enough for your donations which have helped each and every one of these horses, donkeys and mules this year, in addition to 15 at the ranch, two others in training and Gen who will be coming back to the ranch now that the weather is warming up.

We recently set up the ability for people to make monthly, tax-deductible donations using our website.  If this is something you would consider, even small monthly donations help us, just click this link:  I'd like to make a donation.   It is easy to do and can be stopped at anytime.

Thank you, thank you all so very much!

Posted by Equine WellBeing Rescue, Inc. at 5:58 PM No comments: 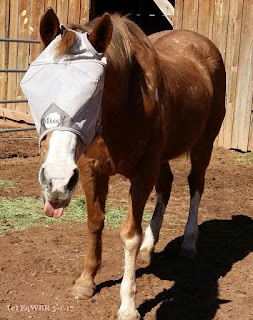 Missy arrived at the rescue on 12-27-16 with a body condition score 2 of 9 on the Henneke scale - emaciated.We are so excited that even in the midst of freezing cold winter weather she is steadily gaining 15-20 pounds a week and it shows. Not only is she looking better, she is feeling spunky! 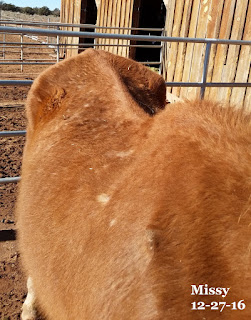 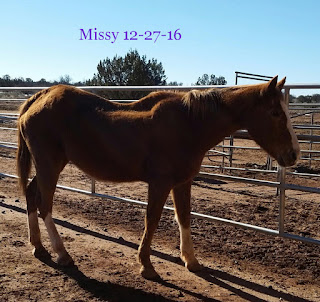 What's our recipe?  Food!  She gets 8 pounds of equine senior in the morning and 8 pounds in the evening for a total of 16 pounds each day, she also gets alfalfa for the cold nights and free feed orchard grass. She gets to eat in a private stall so no one runs her off the food and she can munch throughout the day. She also has a salt block, plenty of fresh water and probiotics.

When she arrived she had an obvious injury to her right hind leg and she was dragging her hoof as she walked. We got her feet trimmed right away. Then Doc Boatright examined her and gave her both chiropractic adjustments and laser therapy. We started her on Equioxx for pain and to reduce any inflammation. With the build up of muscles returning and her therapies she no longer drags the foot but she still has a limp, something that will never go away. 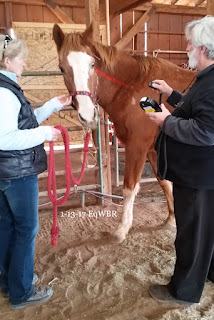 In January we noticed a small scratch on her eye and immediately took her to the vet. We were treating it with antibiotics three times a day and perhaps because her system couldn't fight it after months of malnutrition it wasn't getting better so we took her to the vets at Arizona Equine Medical in Gilbert, AZ and it was decided the best way to end the pain and possible deterioration of her eye was to remove it. Not what we had hoped for, but luckily they were able to perform the enucleation immediately and we were on our way home that evening. Missy did awesome during the surgery, 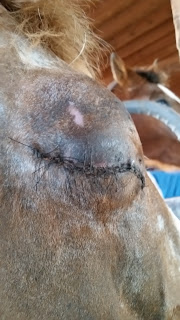 It has healed great and last week Patty came over and we removed the stitches. She has four more weeks before she can be turned out with all the horses and donkeys so in the meantime Twinkle, the little weanling we rescued on 1-14-17, keeps her company. We take her for walks and turn her out when the others are in stalls eating and she is adjusting great.  A short set back to her road to full recovery.

If you would like to help with her continued care, the cost of her surgery $2050.00, other vet bills, transport and medicines please consider making a tax-deductible donation it will help us meet our fundraising goal of $2500.  Missy thanks you and so do we!

Posted by Equine WellBeing Rescue, Inc. at 6:04 PM No comments: