It has taken me two weeks to gather my thoughts and share them with you all.  When you have sanctuary horses, provide hospice care or rescue ones with special needs you have to make the decision to release a horse from their pain more than you would like.

On September 18, 2015 we laid Duncan to rest.  One of two equine of the 23 at the ranch that came down with the seasonal and contagious illness called Pigeon Fever or Dryland Distemper. It is carried by flies and with monsoon rains this year, there are lots of flies and has been an outbreak in the White Mountains area. We do a great job of fly control, but can't stop them all.

Duncan was diagnosed with internal abscesses which only 8% of horses ever contract. With treatment, which runs well in excess of $1000 there is only a 40% chance of recovery, left untreated it is 100% fatal. 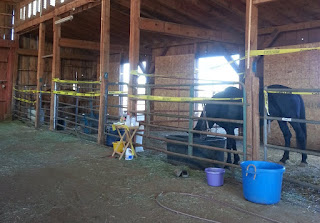 We quarantined Duncan along with Gwen (who had external abscessing) the end of August. The nursing and bio-security began to prevent the spread to any of the other 21 equine on the ranch. Fly control and containment of any pus drainage are extremely important so only I went in their stalls and we cleaned everything with diluted bleach. All items used in their stalls were kept separate from any other horses or use. Even my shoes were changed and sanitized to not track anything out of the stalls.

We had started Duncan on oral antibiotics in hopes that we caught it early. Numerous times a day his and Gwen's temperature was taken.  Duncan fought fevers as high as 105.6 degrees by hosing him several times a day and getting pain medicine to reduce the fever.
He had swelling on his tummy and a few tiny external abscesses which were cleaned several times a day and Swat fly control applied to keep any bugs away and we were hoping for large drainage which would be a sign his system was getting rid of any infection.  His appetite returned and we hoped he was going to kick this infection.

On the morning of the 18th, I went out to his stall and he was clearly depressed.  I took all his vital signs (as I did daily) and they were off the charts, his heart rate way too fast, his temperature high, his breathing very fast with short breaths and the color of his gums darkening. When I touched his side he pulled back in obvious pain. I spoke with Dr. Christianson and she felt he had an internal abscess that ruptured and this was a battle he would not win. The tearful decision was made to let him go before his system crashed.
Duncan came to us on July 4th, 2014 when we went to rescue Lucky from a known hoarder in Camp Verde, AZ.  Duncan had only been there 3 weeks, but was already showing signs of malnutrition.  He gained his weight back quickly.   Usually we don't get much information on the horses we rescue, but Duncan came with his papers.  So following the trail of ownership, I contacted several of his prior owners to let them know we had him and to find out more about him.  I am happy to say that his breeder and one of the families that owned him have donated towards his care and we remained in contact with updates. They were thankful to know he was here and in good hands.   Letting them know he had passed was not easy. 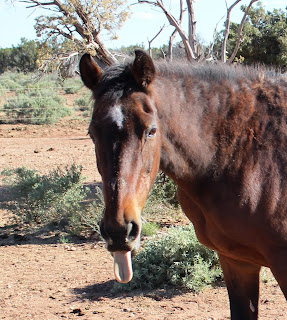 Duncan was a Morgan horse and he had lots of go. I was told he was fun to ride and would move right out on the trail by himself or with a group. We never rode him because he was a little sway back, but he had been a family horse before ridden by people of all ages. Born in 1988, that made him 27 years old.  He was a free spirit, flirt with the mares and loved, loved, loved his retirement. 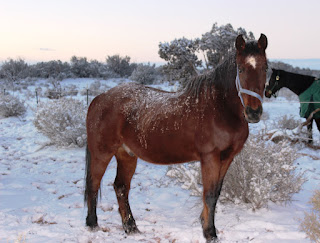 A few weeks before we knew he had pigeon fever he was getting very pushy and would practically run us over when we would go in the pasture and was very aggressive for food.  This was something that Tucker had also done in the weeks leading up to his passing. I mentioned the similarities and now I feel strongly that he was hurting those few weeks and his actions were trying to tell us something. He also would stay to himself, away from the other horses. Till the outward signs of the abscess appeared there was nothing to indicate what was wrong.

The decision may be obvious because of the circumstances, but the process of humanely euthanizing and then burying each animal takes its toll. I saw this quote posted on Facebook and it is exactly how I feel, "Euthanasia is a privilege, a gift. That doesn't mean we have to like it.  Every time we give the gift of peace to a pet, we give up a bit of a peace in our hearts. Over time, we feel those missing pieces of peace more and more. We love animals so much, we are willing to experience pain right down to our souls in order to keep them from hurting.  What great gift to give a friend than to suffer in their place?"  Dr. Cherie Buisson 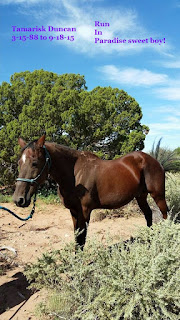 Duncan took a piece of our hearts with him. We were honored to love and care for him and blessed by each day we shared. Earth to earth, ashes to ashes, dust to dust we will miss you so much.