Spending the day with Coffee

What a beautiful day to spend getting to know our newest addition. With this warm weather the long winter fur the horses have starts shed big time. The perfect way to get a new horse comfortable with us is through a relaxing grooming session. It also give me the opportunity to see if there are areas where the horse doesn't like being touched or has some fear issues.

Today we didn't have any issues at all. Not only did Coffee enjoy getting brushed, but he loved having his ears rubbed, all the crusty's around his eyes cleaned away and what must have felt like a nice body massage with the brushing. He liked it so well when I would walk away, he would follow me for more. 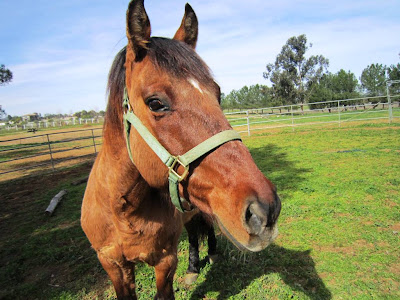 After a nice relaxing brushing what better than to move out to the round pen to stretch his legs. He moves just like Manzanita and Red Ryder. I had to stop myself from calling him Manzanita several times. He readily understood some basic commands and has a very nice whoa. What I liked the best is that he would turn to face me and not move off until told. He even walked over to me when asked to come.

I got a real opportunity to see all his dun factor striping all brushed with the sun shining on him. The pictures don't show great detail, but he has slight cob-webbing on his face, points on his ears, big and bold shoulder strips which makes it look like his mane hangs on both sides. His dorsal strip is nice and wide and has striping coming of that from his withers half-way down his back. His legs also have striping and also some white with lots of feathering. Like Bizzy, some of his striping is red (like you would see on a red dun) and much of it is black like his mane. 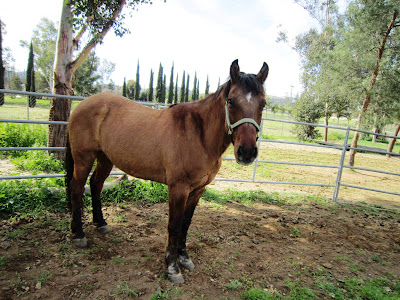 His BLM freeze brand has pretty well faded and looks like just a few white hairs sprinkled under his mane on his left side. With the long winter fur, they were hard to see, but as his coat shortens we might see some detail.

Coffee settled into the round penning nicely and seemed to be enjoying himself as if to say, "look how handsome I am now that I have been brushed". Lary came out to introduce himself to Coffee and they got along just fine. Since we know that Coffee has been shy or slightly nervous around strangers, we assumed he was going to be as friendly and loving as Manzanita and Red Ryder and he responded as they would have. He look was almost to say "how come these people know me so well when I have just met them?".

After letting him relax and graze in the round pen for a while, I brought Bizzy down to introduce the two to each other. A little bit of snorting, tail swishing and a squeal or two and then they acted as though they have known each other for a while. I can see that Coffee is not a dominate personality so we will be sure to boost his confidence before putting him in the pasture with the other horses. But he should fit right in.

I am looking forward to Tuesday when Dee Howe (trainer/body worker) and Dawn Fletcher (equine Chiropractor) come out and we assess his body for any pain and work him under saddle without a rider to see how he does. Later in the week I will do his dentistry. For now, I checked his incisors and canines, all of which had tarter build up that he let me removed by picking with my finger nail. He had no issues with me working with his mouth which will make it so much easier to do his teeth.

He is enjoying the grass in the round pen, the sun on his back and the company of a beautiful Carter mustang filly. What more could a guy ask for?????
Posted by Equine WellBeing Rescue, Inc. at 3:29 PM No comments: