Goodbye to Tucker and Houdini.

This has been a very rough month and I have put off sitting down to write because I just needed some time to process it all.   On April 15, 2014, we said goodbye to Maverick and two weeks later we were devastated to learn our very first personal horse Houdini, who we owned since a youngster had a horrendous neurological episode perhaps from a snake bite and needed to be put down at only age 11. He had been with our friend who has been riding him daily doing ranch work and had just turned him out to pasture for short spring break. He loved him very much and was so distraught when he came over to tell us. Many tears have been shed. This was such a shock to us all.

Then on May 15th, we had to let Tucker go.  Our hearts are aching.

Unlike many rescues, we keep our numbers small.  We have to say 'no' more than we would like and that is so hard.  I get calls, emails and messages weekly being asked to help one or two horses and sometimes numbers well over 100. We simply can't help them all.  We don't have the funding, we don't have the room and will never put the needs of those here aside to take in horses in the heat of the moment when we can't provide for them. We help in other ways through networking, transport and behind the scenes assistance and financial support that most never know about and that is just fine with us.

What many people don't realize when they ask us to take on horses that have suffered starvation, neglect, abandonment or abuse and want us to rehabilitate, nourish and provide a permanent home for, is we don't know the extent of their health deficits or the side effects of their prior living conditions.  Some horses come from other rescues who have started their rehab and others we rescue ourselves, the long-term ones are unadoptable, many very old and most simply unwanted.

The hardest part of providing this safe haven is that final day decisions for horses at EqWBR fall on us. When people ask us to take on a sanctuary horse, they are asking us to make the difficult judgement when that last day is.

We chose the name "Equine WellBeing" because we have a profound connection to each horse as we feed, rehab or nurse and provide for their individual needs.   They get something that horses in many rescues don't, personal time and special attention that is simply not possible with large numbers.  We notice tiny nuances in their behavior, moods and over all health, both mental and physical.

Over the last few weeks we have noticed changes in Tucker's behavior.  Though he was totally blind in one eye, he appeared to be fit, in fact a little on the tubby side.  I consulted others with blind horses to see if those behaviors were attributed to his blindness and did research on line.  It seemed perhaps there was something else going on and we were at the point of pulling blood work and had planned to so so as soon as we returned from our vacation.   I guess God had different plans.

We have a fabulous volunteer and friend Dee, who for many years was a small animal vet assistant and recently started helping us while at the same time fulfilling her life long dream to be around horses. Her keen eye noticed Tucker was off when she came to feed and the vet was called out immediately.  He was having symptoms of possibly a stroke in addition to colic, wobbly while standing, laying down and discomfort of his tummy.

When Dr. Christianson arrived his vital signs had worsened and she determined there was a blockage in his digestive tract and the best thing to do was let him go.  Based on what I had observed over the past few weeks and she saw while here, we suspect he had one or more tumors had not only caused the blockage, but possibly the odd behavior changes of late.  It is hard enough to let one of these beloved rescues go, but not being here at the time was very difficult for us and the sense of failure is on the heart.

Tucker came to us in November 2013, having been rescued very underweight by friend Dana Stark who did awesome putting weight on him. He was brought here to live out his days.   Tucker was 31 years old, blind in one eye and loved his food. With few teeth left he would drop food out of his mouth and it was comical to watch him eat. He always had plenty of soaked food but still loved to quid his hay leaving little balls of hay he had sucked on all over the pasture and barn.  You could tell everywhere he had been.

I am glad that I had a special day with him right before we left on our trip.  Brushing helped shed his winter coat, a bath removed of the sand he loved to roll in, fluffed and buffed, he loved it all and I loved the time spent together.  He was a character and with his sight deficit he still carried himself boldly.  When approaching we spoke to Tucker so he knew where we where, touched him gently so he wouldn't be startled.  A very special horse we miss very much.  It was extremely painful to go out to the barn when we got home knowing he was no longer there.

We want to thank Dee for her dedication to EqWBR's horses and being here for him all day, Dr. Christianson for dropping everything and making the 70 mile drive here to help Tucker and one of our kind neighbors named Doug, for rearranging his overbooked day to come bury Tucker that afternoon. Every one's willingness to help these rescued horses is amazing and so deeply appreciated.

I was told that he walked out in the field by Maverick's grave and stopped at a sandy place in the cooling shade of a tree.  He then laid down and rolled like he enjoyed that perfect spot, sat up relaxed and sighed. Tucker seemed to know he was well loved, that those were his final moments and was at peace with it.   Dr. Christianson helped him gently cross over the rainbow. A calm moment to end a long and hopefully, mostly happy life.

The hoof prints to his grave will forever be etched on my mind.  They were the last I saw of him. For those of you who know the poem "Footprints In The Sand", to me, where Tucker's hoof prints end is the place God carried him home.

RIP Tucker we were so blessed and honored to care for you.  You have touched our hearts deeply.
There are expenses that need to be covered and I hate to ask in a message like this, but I must.  A donation to honor any of the horses recently passed or those still in our care would be a huge help.  We appreciate every one's support.  We couldn't provide and care for these lovely animals without it!

Thank you all so very much on behalf of Autumn, Babee, Danny, Fancy, Gwen, Liam, Max & Ruby.

Posted by Equine WellBeing Rescue, Inc. at 2:51 PM No comments:

EqWBR is Going GREEN for the WellBeing of the Horses.

In an effort make things healthier for the horses at the rescue we have been making more changes over the last several months to reduce toxins to the horses, in the barn, the house and throughout the ranch.  For many years we have been using herbs and essential oils along with alternative therapies like kinesiology, cranio-sacral, chiropractic and therapeutic massage in our effort to bring well-being to our rescues.

For some time now, a dear friend, supporter and Red Ryder's former mom, Darice Massey, has been sharing with me how they have reduced toxins to their animals and themselves and got me excited about things that we could do to help the horses and is doing a personal fundraiser for EqWBR.

In 2014, we started replacing toxic products with safer, environmentally friendly ones through a wellness company and after reading their Wellness Guide, we have been following their tested remedies for horses. Remedies for abscesses, arthritis, fly control, girth itch, to sheath cleaning, thrush and so much more.   Not to mention cleaning in the barn. 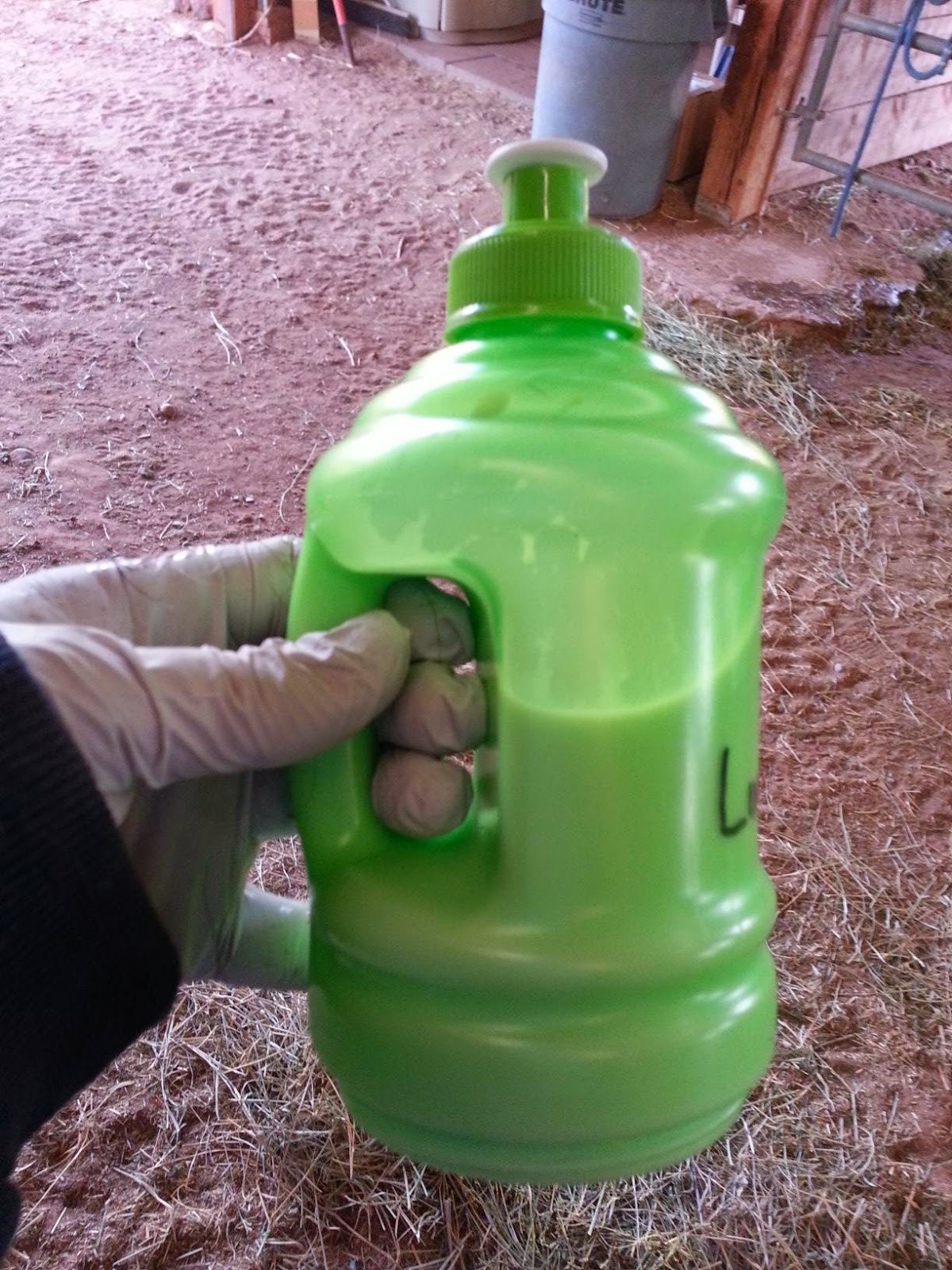 The first remedy I used was a liniment mixture for Maverick. Along with the therapeutic massage I gave him daily, the Previcox to help pain management, I worked mixture into his arthritic knees and painful hips and hocks. I could see the difference immediately as he would reach down and nuzzle my hands on his knees when applying it and he would walk off with a little freer movement. The gloves were just so my hands wouldn't get full of wet, shedding hair and dirt.   We also use a mixture on Babee's abscess and foundered feet.

After making posts on Facebook people started asking me about what we were using so I thought I would share with everyone and if you have any interest you can contact Darice for more information yourself.    Angel, Karen & Nancy have already done so.   If you are on Facebook, you can "Like" her page Shop Safer With Darice where you will find good information, or contact her at 760-662-6555 or daricemassey@gmail.com.

She has offered me a teleconference for anyone who wants to pick her brain, like I do, on May 20th at 7pm so if you want to join us, just let either one of us know via email and we can get you the details.  Not giving anyone a sales pitch here, just passing on the information because I like the responses I am getting from our horses and thought you might too. Tried, like, now sharing.

Thank you all for your continued support!

Posted by Equine WellBeing Rescue, Inc. at 2:20 PM No comments: