It has been a very busy new year so far.....    In January we assisted with the dispersal of the horses at the Liz Masters ranch.  When the call for help came in, there were 117 (approx) horses at the ranch and EqWBR supported the efforts by helping find homes (one is still here), quarantining horses here, fundraising for hay, transporting horses and continue to assist now that the horses are all off that property helping to obtain registration papers for those who purchased and/or took in horses.

In the midst of that we had 12 orphaned foals that had been quarantined in Bishop after being bailed off the Fallon Feedlot, brought down here where we found wonderful homes for each of them delivering as far away as Boulevard, Alpine, Lakeside and locally in Ramona.  Many families taking in more than one and all immensely enjoying the fun of having a young horse to love on.

Then, last week, we got an email with this picture of a poor mare that had been abandoned and left to roam in Riverside and had been picked up by the Riverside Animal Control on Jan. 30th, and her time was up.  They had put her on the 'to be euthanized' list and was scheduled to be put down.  The email was a call for help from a small group of people who have made a world of difference for people in Ramona after the last major fire in 2007.   A call for help I just couldn't refuse.

So in the following days I drove up to Riverside and picked up the precious, skin and bones mare from the shelter. On the way home, she was vet checked by Dr. Ryan Heaton of West Coast Equine Medicine. Her vitals were good and her heart strong and lungs clear.  We figured her to be approx. 22 years old and in need of food, hoof trim, de-wormer, and more in depth check for pain and lameness.   She got her and settled right into her stall.   Meet Precious: 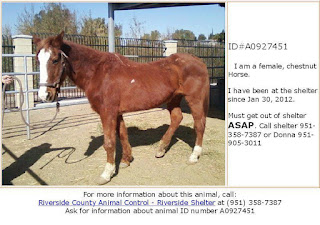 Within a day of her arrival Ilona (hoof trimmer) and Dawn Fletcher, Equine Chiropractor came over to help me assess her overall condition.   We found her left front pastern and fetlock fused so it won't bend and she has a large bony mass on her left knee.  As we were trying to trim her feet we found she could not support the weight on her back end when her feet were picked up and actually fell back on her butt one time.  It took us 3 hours over two days to get her feet trimmed.   Below is Ilona and Dawn working with her. 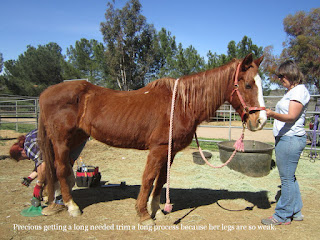 I put her body condition score on a scale of 1-10 (10 being obese) at a 1.  Basically skin and bones.  Not even enough muscle mass to help her hind end support herself while trimming her feet.  She has some scar tissue on each eye making her eye lids a little droopy and I suspect her teeth are in bad shape.  But I want her to settle in a little before I do her teeth.  We have started her on a pelleted food, supplements, fat product and hay, so she will be eating well while we are waiting for her health to get a little better to do her teeth.
This weekend we put her out in the pasture with SHALA (before pictures - when she arrived here below),
And this is SHALA after two months at of our TLC and thanks to so many who donated funds for her to get all her blood tests, medicine, supplies and food to bring her back to health.  Remarkable being she was being thrown away and sent to slaughter when we bought her off the feedlot and brought her here. 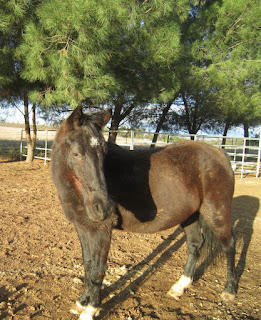 SHALA on 11-13-2011 given a clean bill of health from Dr. Garfinkel
In the same trailer load that SHALA came with also came a young filly that we called Cinnabon. She had been adopted, but that didn't work out and after about a month she came back to live with us again.   We also bought Cinnabon off the slaughter lot and once back here have just been letter her be a horse.
Though she recently got sedated by Dr. Garfinkel using a blow dart (Blog Post) , we put another halter on her and had her feet trimmed.  I am still working with her getting her used to the halter and using a lead line, being handled, brushed and learning to have us pick up her feet.  She is still timid, but does love being rubbed.
This last weekend we finally put all three in the same pasture and they seem to be getting along just fine.  I have to admit I like geldings better than mares or fillies, but these three have touched our hearts deeply.  They were unwanted, abandoned, and then almost killed because people who, for whatever circumstances could no longer keep them.
I go out to the pasture and they all approach me for treats.  Sometimes I have them, sometimes I don't (i really don't want to create cookie monsters by always having treats) so they always have to sniff my pockets and my hands and stand around thinking if they wait, maybe treats will appear.   They are all sweet and tough at the same time...they were tough enough to survive what they have been through- the pain, starvation, fear and mishandling.  Strong women...gotta love and respect that!
And tonight, which was warm after a day in the 80's in March - unseasonably warm - tonight was like a fine summer evening and as they were gathered around me I realized there was about 10 years between them each.  Cinnabon is not quite a year yet, SHALA is approximately 12 and Precious is about 22 years old.
Generations apart..they certainly could be a grandmother, mother and baby.   What a wonderful opportunity for all three to find comfort with each other and not compete because they are all the same age.   I really don't see them picking on each other.  Maybe a gentle correction when bounds are crossed, setting an example of things a young one doesn't need to be afraid of, and overall a realization that they are all safe and will have their needs meet, including much needed love and affection from humans.
Precious has a long way to go to recover her health and some injuries are permanent like her leg and eyes, but she has vigor and a will to live that sustained her while roaming the rural areas of Riverside to fend for herself. In no way has she given up just because others gave up on her.  What an example of strength when the chips are down.   I learn so much from these horses.    I think we all do.   The granny in her late 80's or 90's that is still running till she drops.
SHALA and Cinnabon have regained their health and now need training before they can move on to good adoptive homes.   After injuring both my ankles last fall and still having pain from that when I spend too much time on my feet, I will need to bring in a trainer to work with both of them so they will get used to being handled by others and both will stand to have their feet done.   Right now, they are both still fearful of having their feet done.  So funds will be used to provide that training and I will be able to oversee their training by having the trainer come here.   In a month or two, they should both be able to safely go to adoptive homes.
In the meantime, I will truly enjoy have the three generation of females in the pasture together and watching them in their own little herd.
Tomorrow Tristan, one of the horses we rescued from Borrego Springs last year will be going to a new home and we are also training Colonel Hogan, who came to us from the Liz Masters horses and soon will be training time for beautiful Prince William.  When I get a little free time I will summarize our total numbers of 2011, but right now it looks like we assisted in the rescue and rehoming of around 80 horses and this year has already been over 15 and then the LM horses.
We can't thank you all enough for your support because with out the financial donations of so many wonderful people, we - you - could not have helped as many horses who are now safe, in good homes and those here, getting the much needed care and/or training that they need to continue living a good live and have well-being!
A little late, but Happy New Year!!!!
Christine Griffin,  Founder & President
EquineWellBeing.org
PO Box 324
Ramona, CA  92065
Tax ID #45-2835562


Posted by Equine WellBeing Rescue, Inc. at 10:06 PM No comments: