See what you have done? 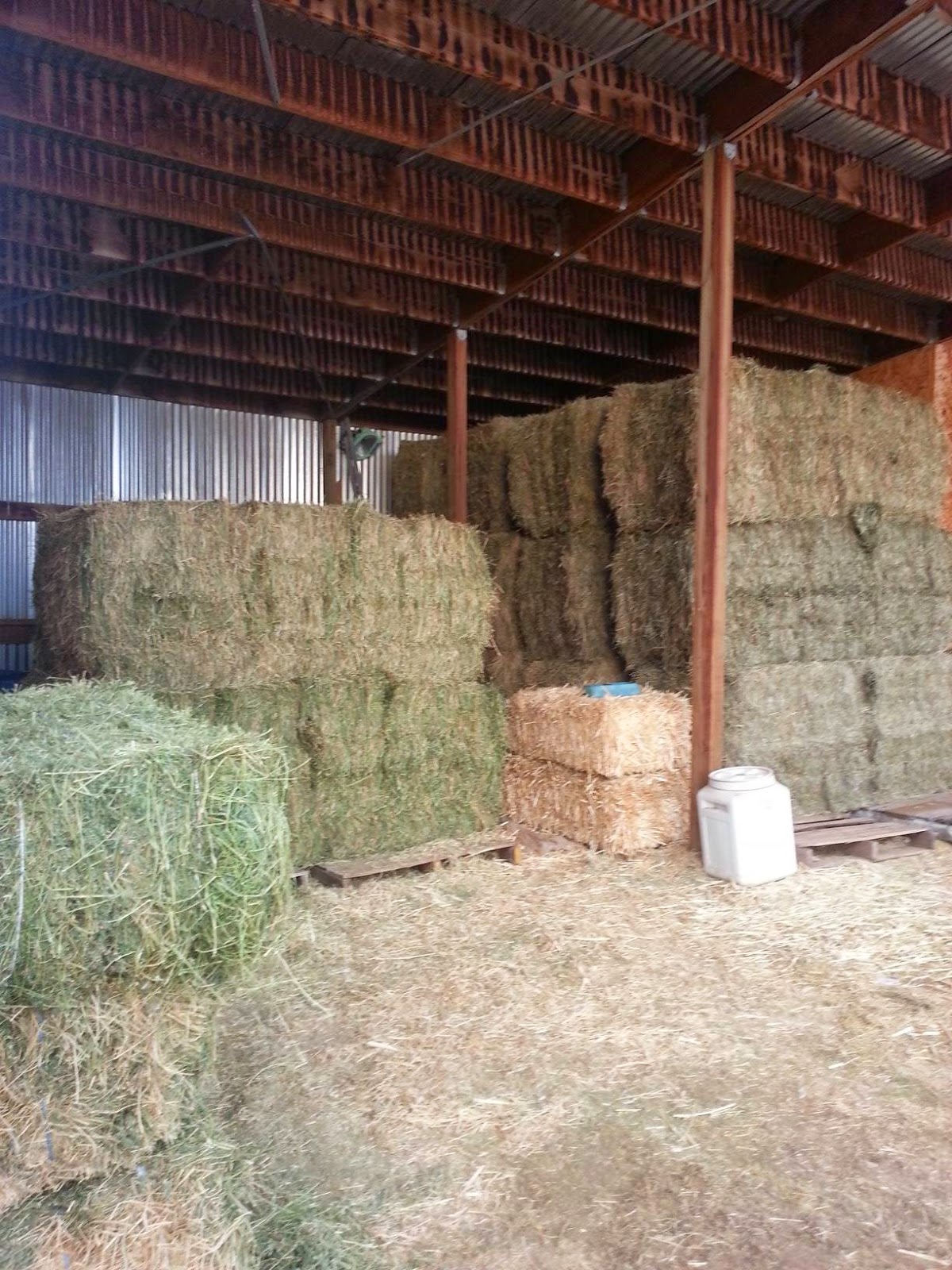 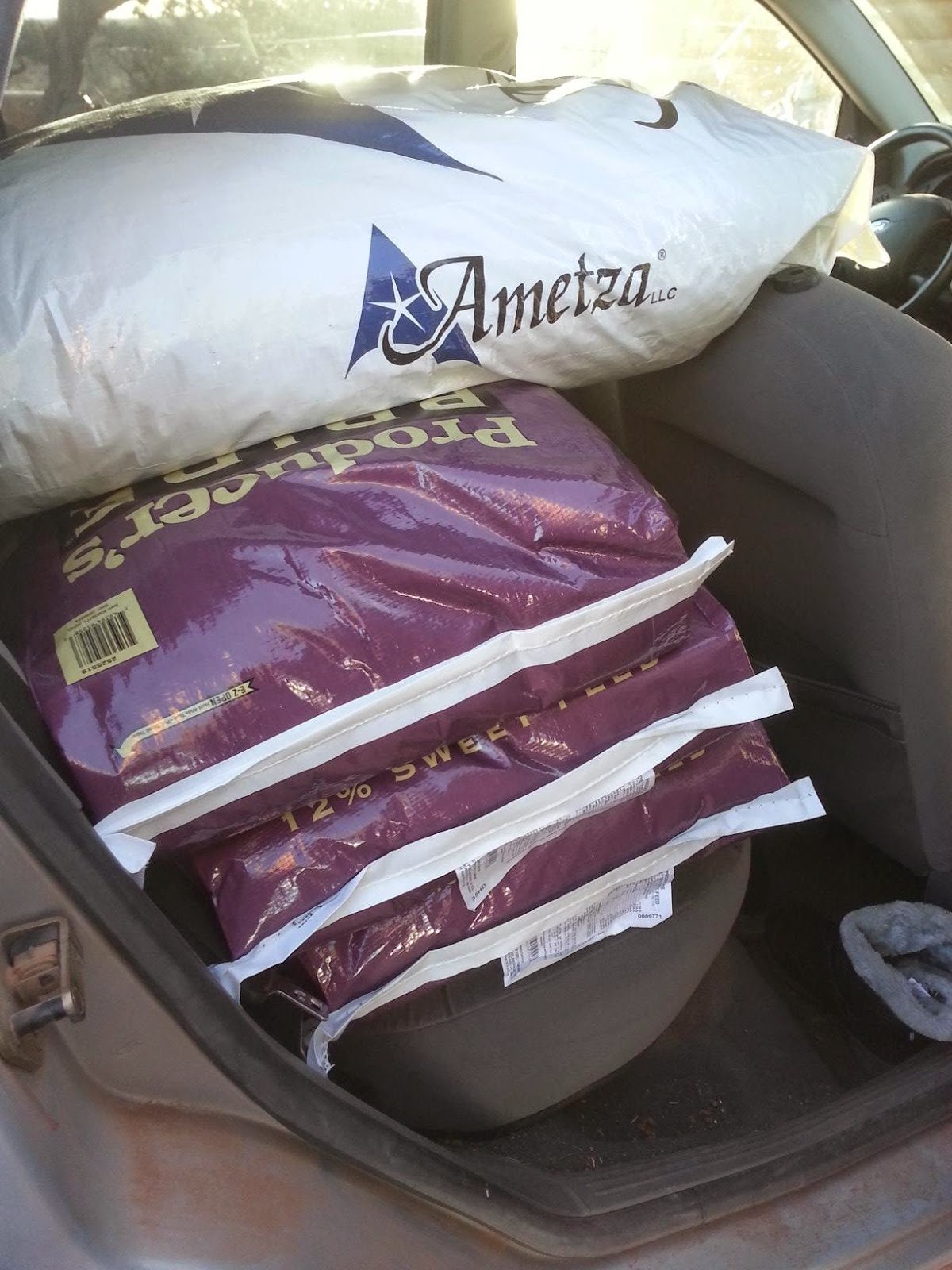 This is one week of pellets for Kiotai and Caramel while they are feeding their foals, Caramel's still yet to be born.  Raylan has mare milk replacer powder and the bottles and nipples to supplement his hungry appetite allowing Kiotai to gain some weight.

Danny gets his senior feed (not pictured) and soaked hay pellets and all get their daily pound of Purina Enrich Plus which has 100% of their vitamins, minerals and amino acids.

With the good eats the mares have been getting since arrival on March 10th, Caramel has filled out some and we can see the foal growing in size too.  She is showing signs that indicate she may foal any time now. We check on her many times daily but horses prefer to foal where it is quiet so we suspect like most, she will do so in the middle of the night. 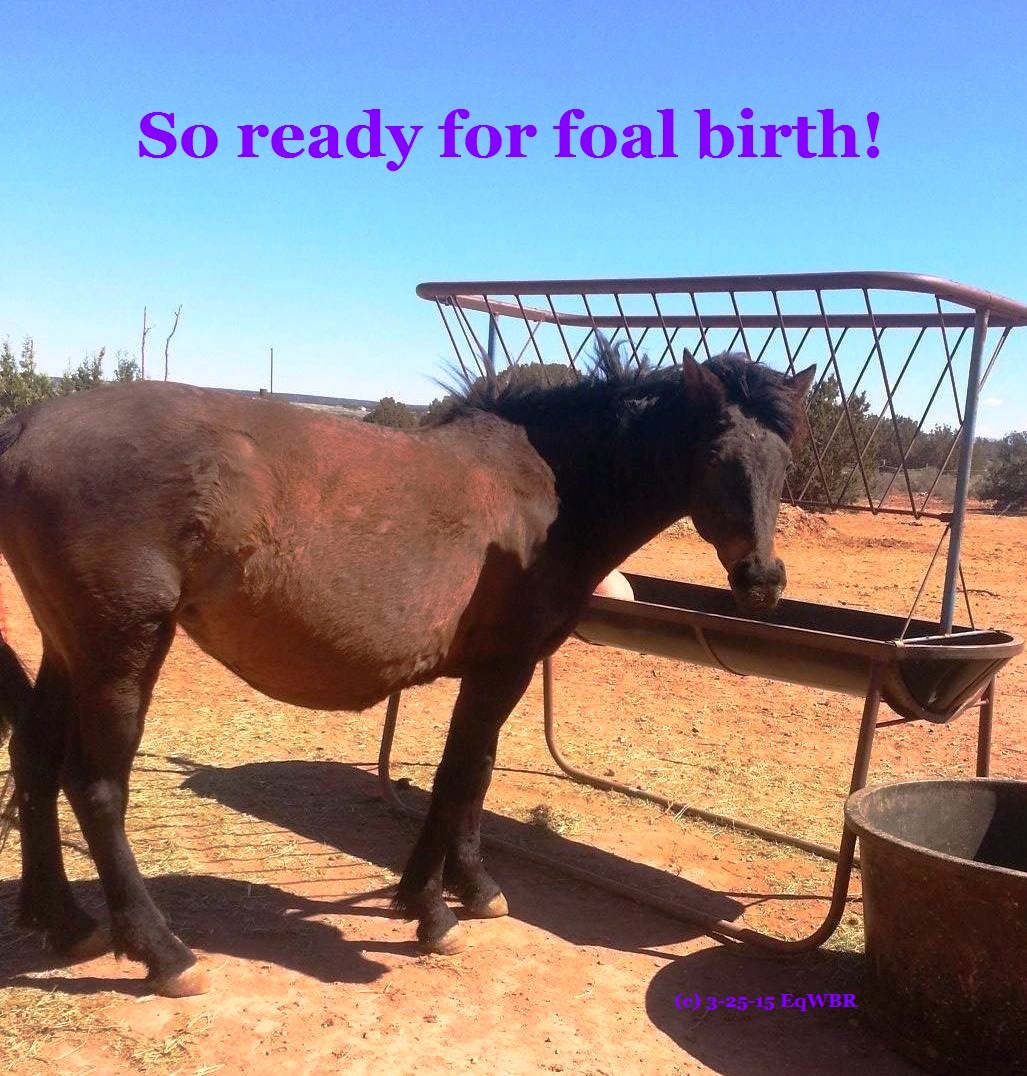 Kiotai is loving the daily attention and slowing putting on weight after being out on the Navajo range over the winter.  You can see the calm expression on her face while Dee is brushing he. 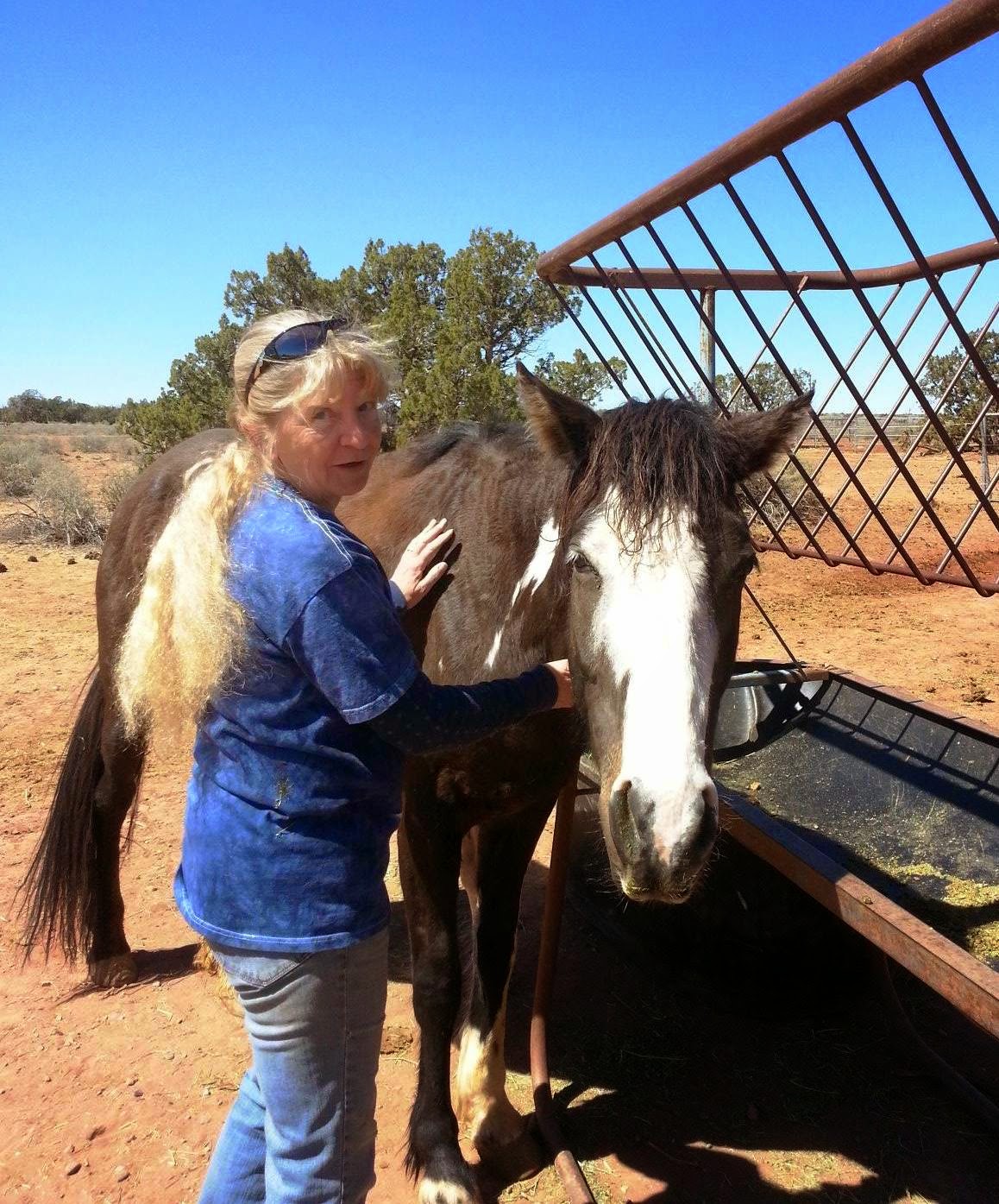 And our sweet Raylan is growing like a weed.   He is chewing on everything as his first few teeth come in.  He has in center lower incisors and the uppers should cut through the gum soon.  He is a ball of energy, loving to run around the pasture kicking up his heels.  His next favorite thing is taking a nap in the sun. 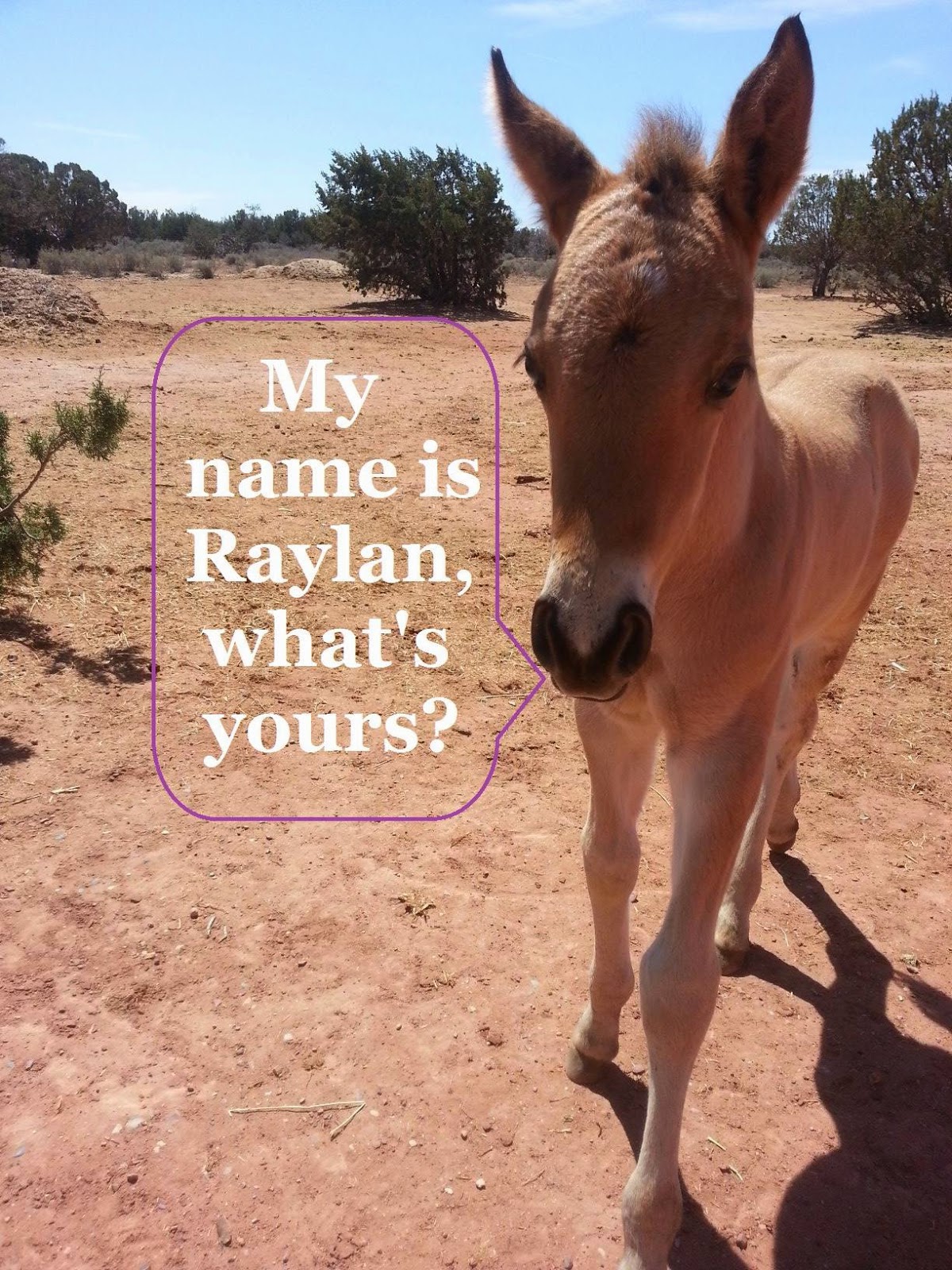 We just wanted you to see what your donations do and how you help the horses here.  Thank you from all the horses and us at EqWBR.

Posted by Equine WellBeing Rescue, Inc. at 4:24 PM No comments: 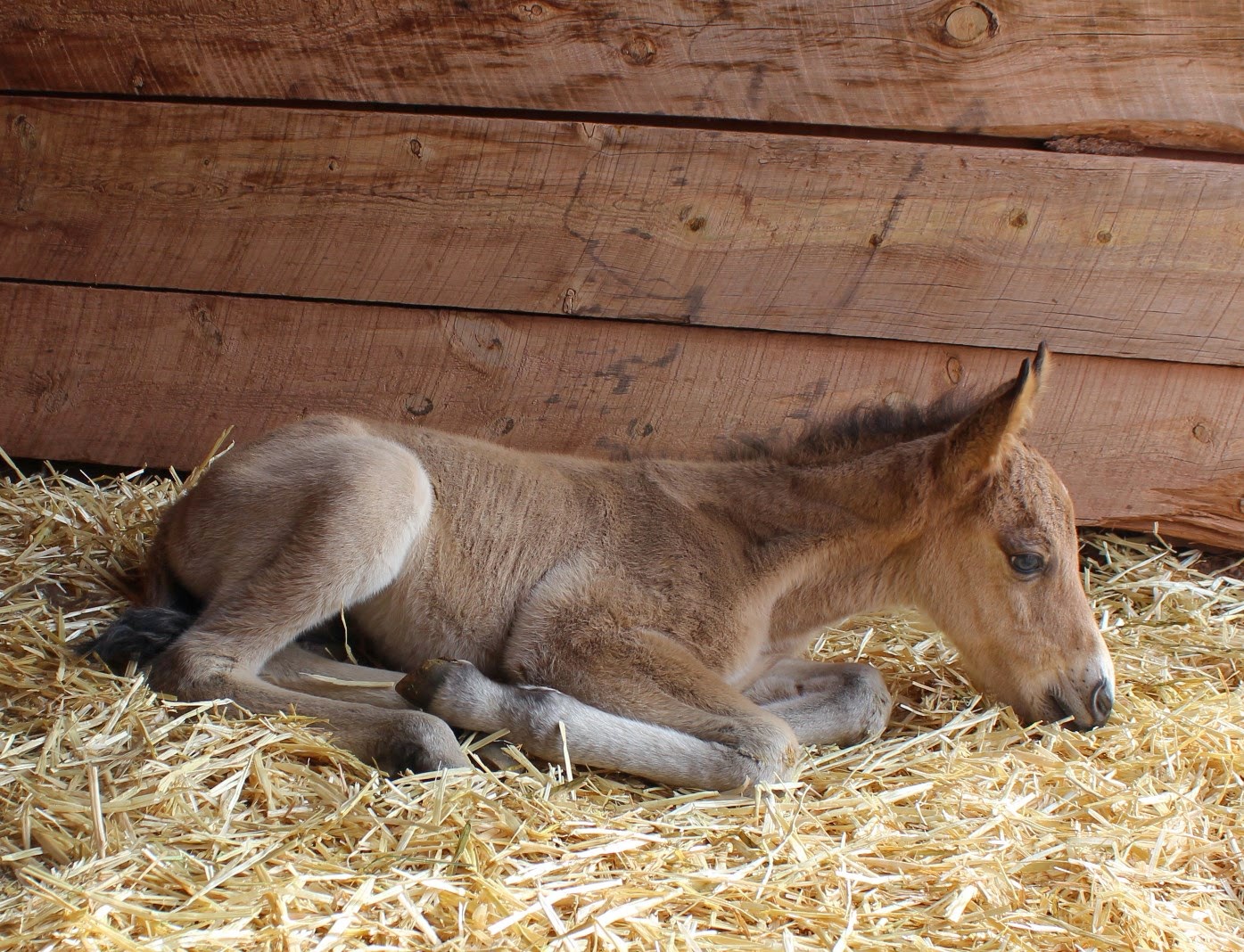 Born 3-10-15, this little colt, his mom and one other very pregnant mare are our newest residents. A few weeks ago I was contacted by people on the Navajo reservation that were referred to us by Dr. Ruby, a vet we have worked with for many years up on rez.   The family was moving to Wyoming to take a new job and had pregnant mares they had been trying to sell.  They found a buyer for $500, but he didn't want the foals so they asked if we could take the foals.  Problem was they were hoping to leave for Wyoming on the 12th and the foals weren't born yet.

After talking with Dr. Ruby, getting a little more background and discussion of trying to bottle feed two foals we agreed that having the foals be able to nurse for at least three months would be best. Getting the foals as soon as born would require feeding every two hours and the cost of milk replacement powder is not cheap, especially for two foals.   It was more cost effective for us and better for both the mares and future foals to buy them and bring them to us as soon as possible. 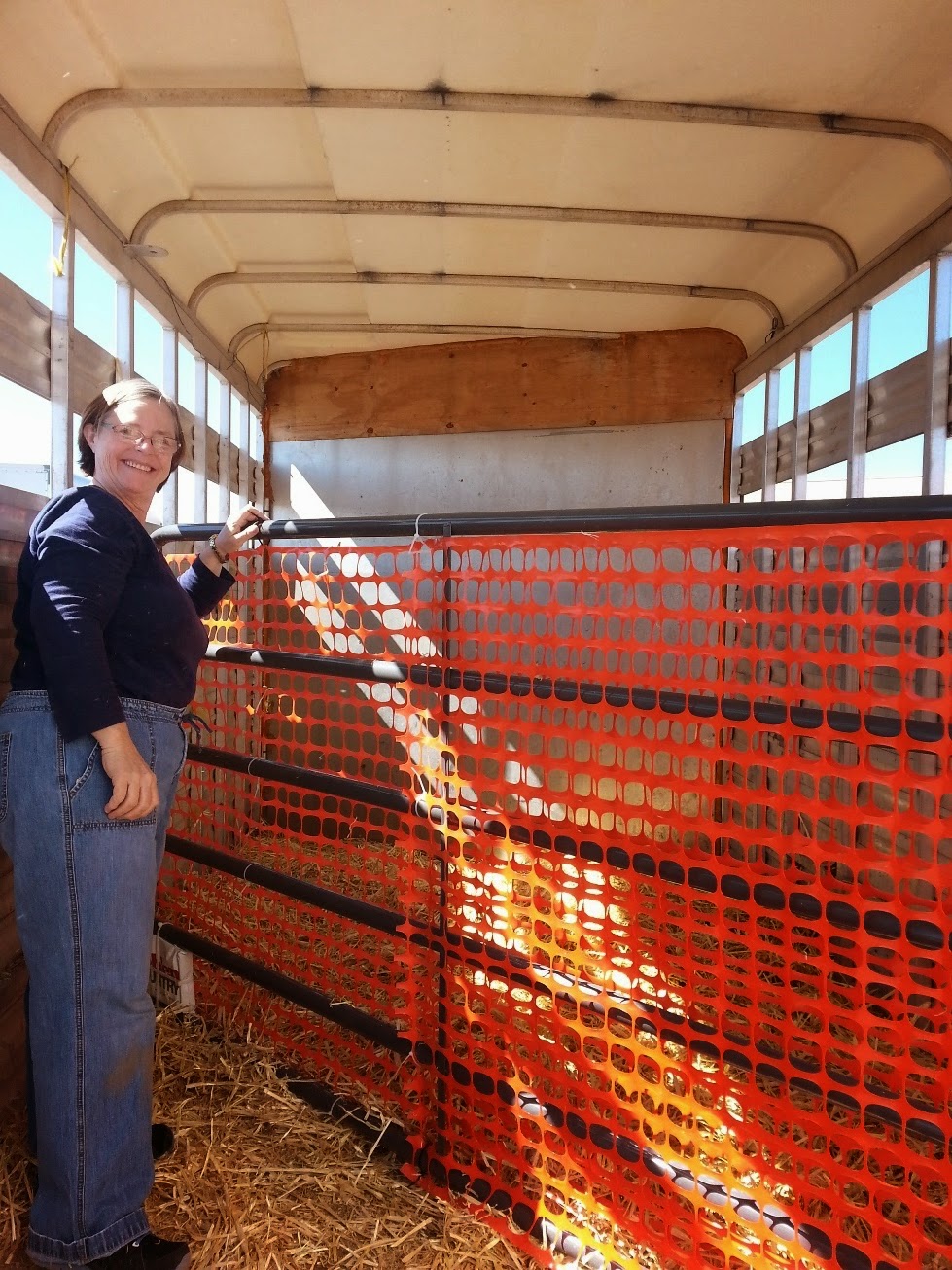 We offered the family $300 per mare and arranged to meet them halfway and pick them up on the 10th so they could still leave on the 12th for their job in Wyoming.   Tuesday morning they went out to the pen and one of the mares had foaled already.  We had to kick things in gear here to foal proof some pens and create a divider in the trailer to haul them without risk of the colt being stepped on. Volunteers Dee, Stan and Bobbi, rallied and helped us get everything done before we left to pick them up.  Patty rode with me and we fashioned a divider in the trailer using a pipe panel we purchased at Tractor Supply along the way.

About 12 miles into the reservation we met the family at the intersection of an unmarked road, which is the way much of the reservation is.  We followed them a few miles out to their home were they live off the grid in the middle of no where with spectacular views of open ranch and huge buttes.  The mares were very thin because they had been out on the range free feeding all winter and had just come in last week.  Thinner than we had hoped and confirming our decision to get the mares right away so we can feed them well before and after the births.  The colt looked great!

Meet our new arrivals.   These are intake photos of the three. This is Kiotai, we named her that because she has the white face of a coyote on her side.  As you can see, she is very skinny now that the colt has been born. 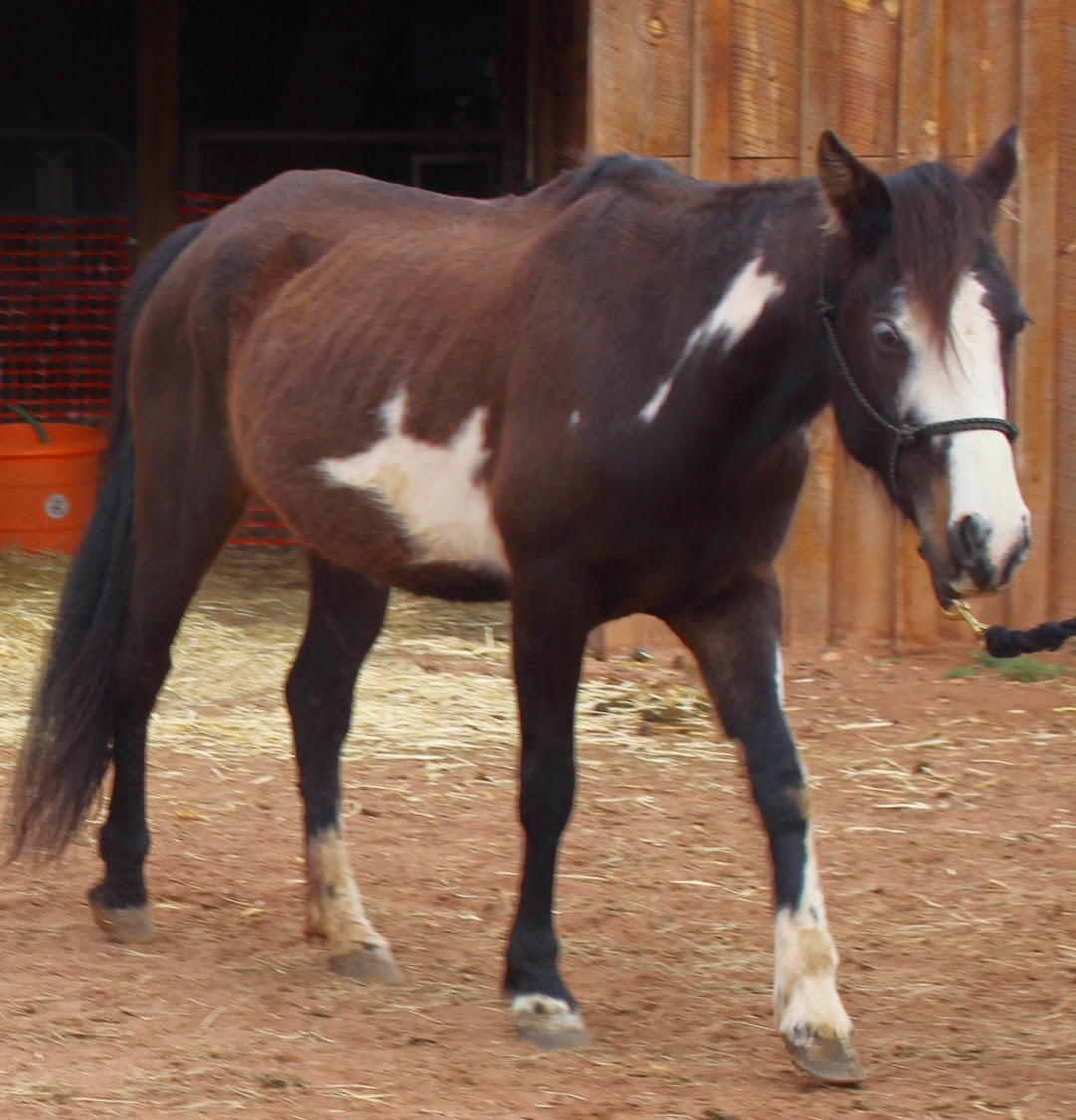 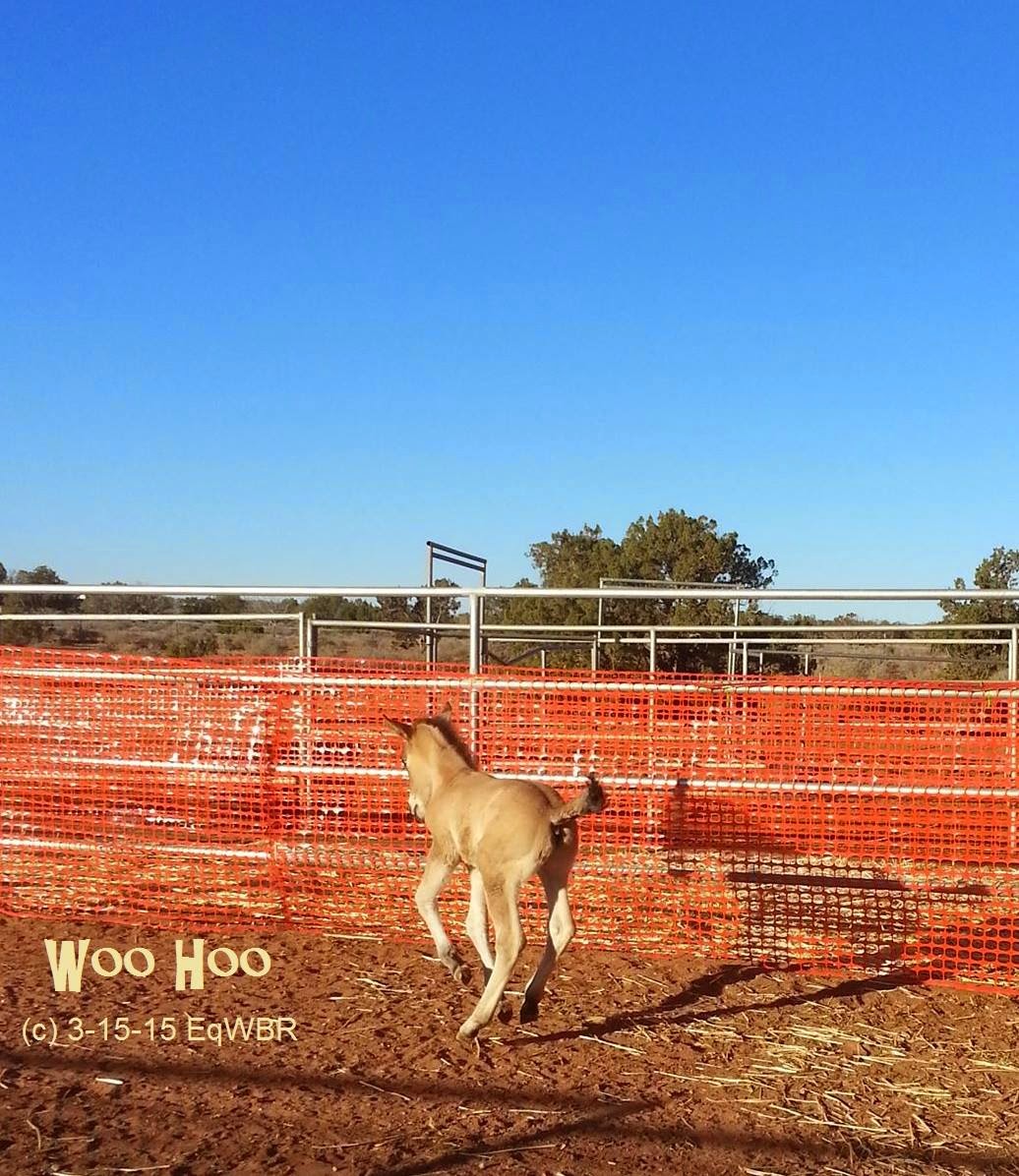 This is Raylan, also nicknamed Stinker because that is how he acts getting into everything, running around and adorable as can be. 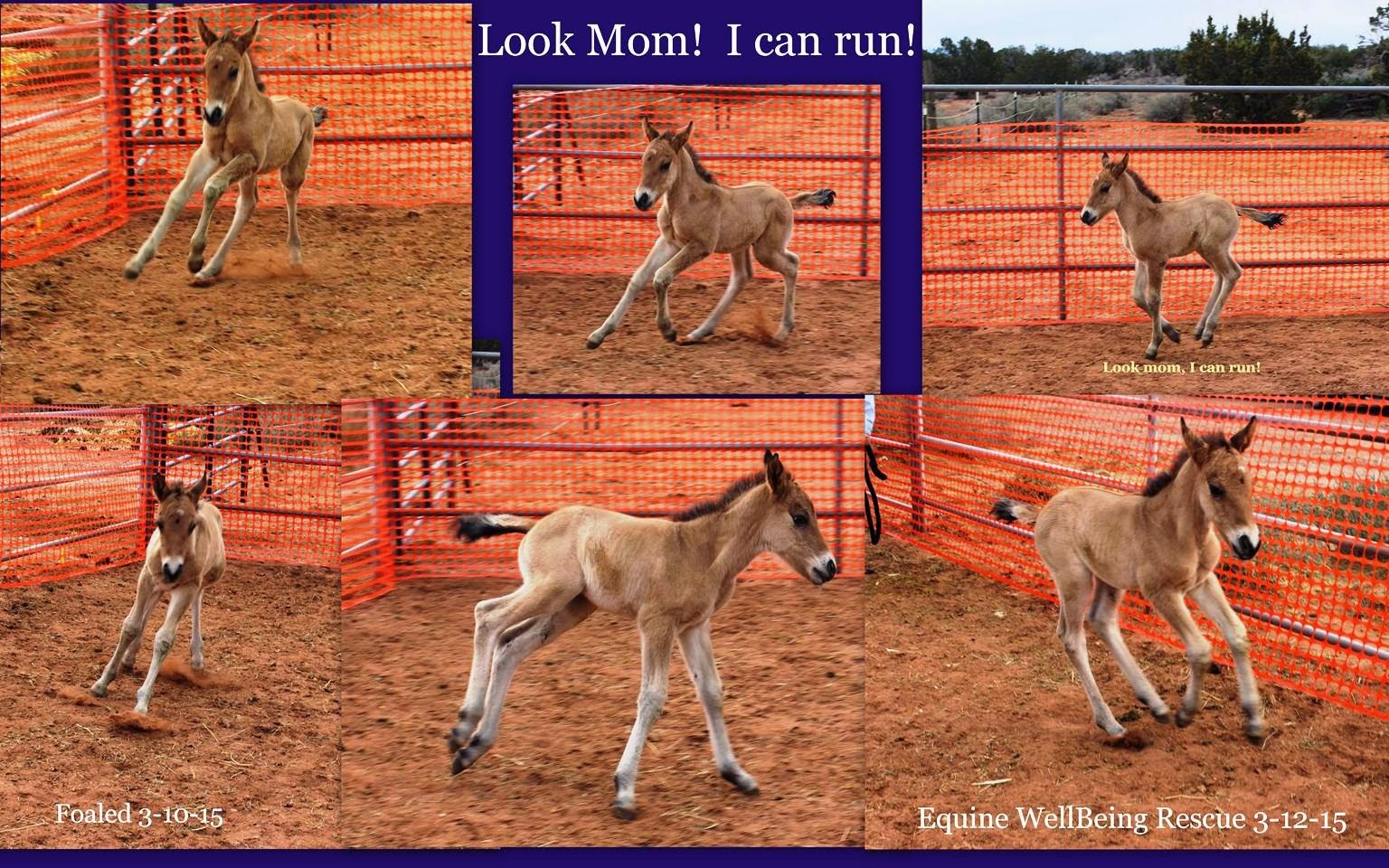 And this sweet pony mare we named Caramel because of the pretty coloring around her muzzle and face.  She is a pretty golden bay dun horse (she has a very clear dorsal strip which is a marking of a dun colored horse) and we suspect will have her foal in the next week or two. 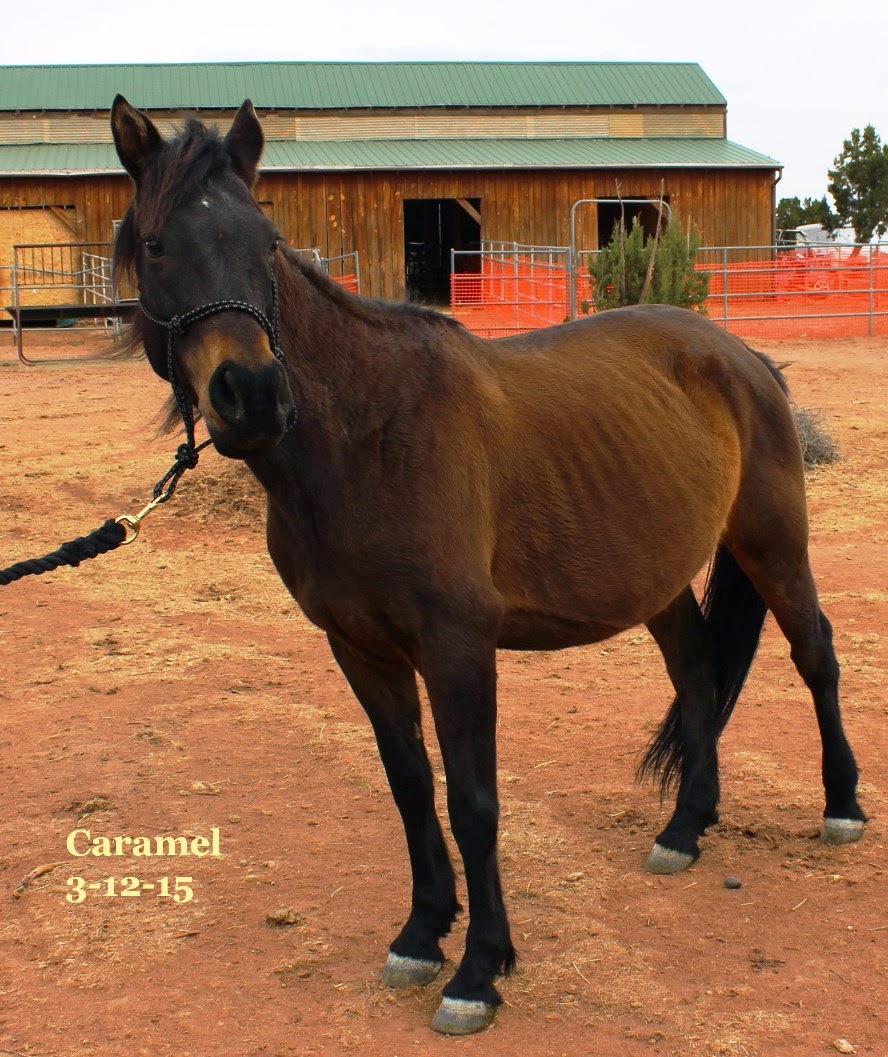 We had a welcoming party that helped us unload and get them settled into their new stalls.  We shared a bottle of wine in celebration of our new born foal too.
As I write this, they have been here 10 days and we have been really busy grooming, cleaning stalls and monitoring everyone's health.  Both mares are slowing showing a little weight gain, their coats and manes becoming shiny and they love the daily brushing and massage that makes them feel much better.  I have scooped more wet straw since then ever before, they all like to pee in the barn, some-thing I just don't get since they came off the range and cleaning keeps me busy for several hours a day.

We have been in close contact with Dr. Christianson as we are on baby watch for Caramel's foal and we keep an eye open for colic or other signs of distress with the changes they have all gone through over the last week.   I have to say they seem to like it here and meet us at their stall gates now when we go out to the barn.

Two days ago we opened the stall gates and let them out in to what used to be the oldsters pasture which gives them a couple acres to roam and Raylan can burn off some of his energy.  He runs like the wind, then flops down for a nap when he's worn him self out.  I have been supplementing his nursing with bottle feeding to help Kiotai get some weight back on and he is already exploring hay and sweet feed.  The times slips away watching them.

While these mares are nursing they will need extra feed to gain weight and provide for their foals, milk replacer powder to assist in the foals growth, hay and straw are all extra expenses we now have. If you would like to make a tax deductible donation to help us care for these sweet moms and soon two foals your donations would be so greatly appreciated.

Posted by Equine WellBeing Rescue, Inc. at 7:45 PM No comments: 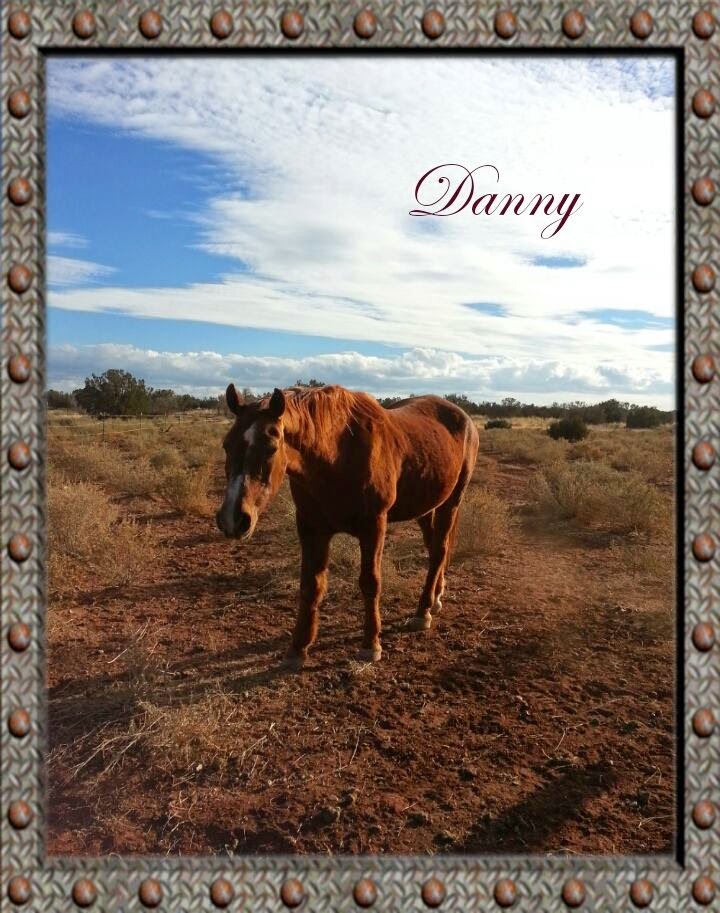 Happy Birthday to our Danny boy!

What better day to celebrate Danny's birthday than St. Patrick's Day! Kiss him he looks Irish!

Almost 30 years old and short on teeth this guy gets soaked pellets and senior feed twice a day and though he eats hay, he quids and spits most of it out.  But the hay juice keeps his stomach busy and helps prevent ulcers. Danny has been with us since 2012.  He has Addision's disease so we watch his diet very carefully and kept him blanketed through the winter cold to help regulate his body heat.

Help us celebrate his birthday with a simple present, a $17 donation in honor of March 17th, a day to celebrate being Irish!  What could be more Irish than a red headed Danny boy?

We can't thank you enough for your continued support of the horses at the ranch and others we are able to help.  You make all the difference in their lives! 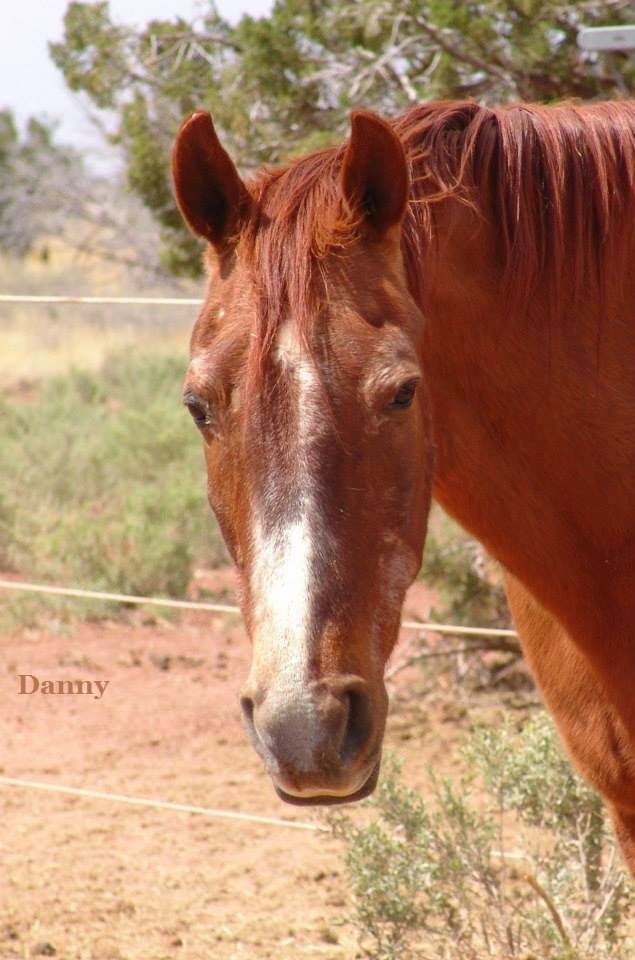 May the road rise up to meet you.
May the wind be always at your back.
May the sun shine warm upon your face;
the rains fall soft upon your fields
and until we meet again,
may God hold you in the palm of His hand.

Thank you from Danny!!!!

Posted by Equine WellBeing Rescue, Inc. at 8:10 AM No comments: