We have three new residents, rescued from a horrible neglect situation in South Dakota affecting 810 horses, mustangs.  There has been lots of drama surrounding this situation, but our goal was to offer help to horses in need and we were immediately asked to take three horses that have been together since they were little, two of them orphaned foals, one who lost his ears to frostbite in a huge blizzard.  They arrived November 3rd. 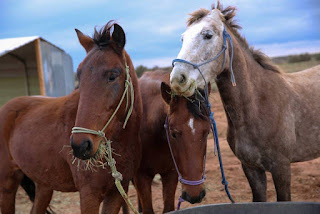 Meet Peyton, formerly Takini. We chose the name Peyton because it means, royal and regal, even without his ear pinnas he has such a thoughtful expression and kind demeanor. Based on the date of the awful blizzard that hit a multi-state area in October 2013, he is about three years old.  I have not gotten a chance to lift his lip and age him from looking at his teeth.  I don't want to rush him. 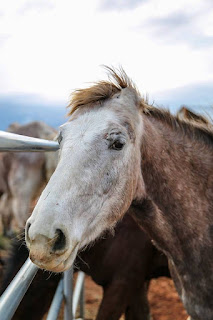 This is Caleb, formerly Akicita whose lineage is from the Virginia Range mustangs.  A large number of that herd were taken in by ISPMB many years ago.  Caleb was bred in captivity, rejected by his mare as a foal and bottle fed as a baby.  Based on his teeth he is four years old. 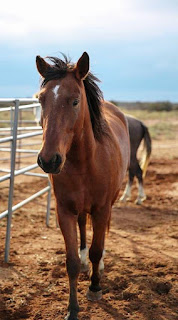 We kept Thumper's name, he is cute and fluffy, just like the rabbit he is named after. Thumper is the youngest of the group at just three years old and very friendly. 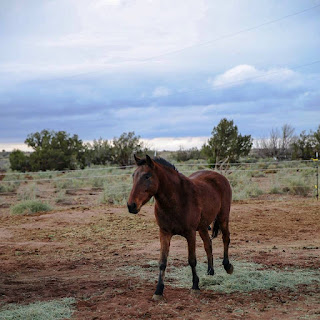 Sadly for the rest of the original 810 horses impounded by the law enforcement agencies in South Dakota where the horses reside, if they do not find homes by November 30th, the Dewey County Sheriff will be auctioning them off to anyone, including killbuyers.  As of today about 100 have actually found homes and left the property some blind, with deformities, hooves that look like slippers and many mares with foals at their sides and probably pregnant too. 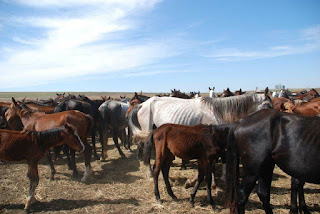 We continue to help the effort by sharing the need for homes with as many as we can. This is a very sad situation where it is a long established, highly visible International Society for the Preservation of Mustangs and Burros (ISPMB) rescue that is in need of rescuing. I said earlier there is lots of drama surrounding this with many calling for the arrest of the woman running the rescue and her in return not wanting to let any of the horses go and people in the middle, boots on the ground, helping get horses into new homes.  You know me, I jumped in, ignored the drama and got these three horses out of there and safely to EqWBR.

At our limit on the number of equine we want at the ranch heading into winter, the recent adoption of Jack and Jake, Naco donkeys numbers 5 & 8 and the unexpected adoption of Brandy (I will update you on her in another post) allowed us to say 'yes', and rescue the three geldings.

Artist Marty Bower offered one of her gorgeous framed prints to help us raise funds for transport and vet costs for transport documents.  Through that Facebook auction we raised about $1300.  Transport was $1050 and vets bill $285.  Marty ended up donating two of her framed prints to our top bidders and our friend and adopter Rebecca Davey offered jewel decorated horse shoes to our 3rd, 4th and 5th highest bidders.  We can't thank both ladies enough for stepping forward to help and to all those who donated via this auction. 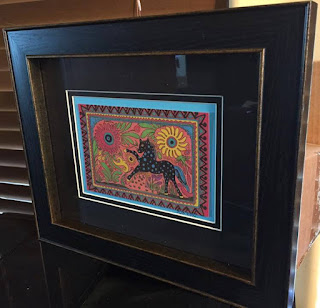 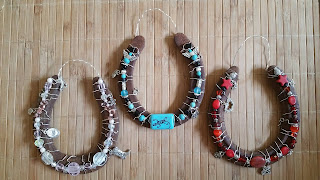 Thanks also goes to Diane and Linda L who helped me set up the quarantine/catch pen so the hauler could off-load the dozen horses from the trailer so they could stretch their legs, have a drink and eat while taking short break from the travel. To Richard who helped unload, feed and sort the horses getting our three into their small pasture and to Linda of Linda Gayle Photography for taking and donating such beautiful photos of their arrival. 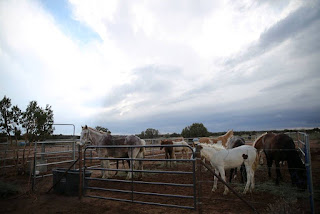 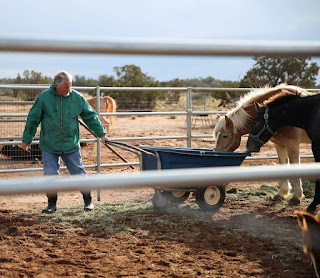 Peyton, Caleb and Thumper are settling in.  They are very friendly and approach us anytime we go out there. Their feet really need to be trimmed so we are working on getting them used to having their feet picked up while they get used to their new home. Peyton is thinner than I would like so having access to hay round the clock will help him gain the weight he needs.  Other health care is on their 'to do' list, one step at a time. 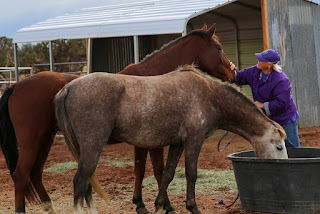 Thank you all for your continued support which has allowed us to help these three in great need.

For anyone interested in adopting a horse(s) there is a page on Facebook called ISPMB Horses Emergency Adoption Mission or you can contact Elaine Nash at 970-799-1000 to start the process.
Posted by Equine WellBeing Rescue, Inc. at 4:50 PM No comments: 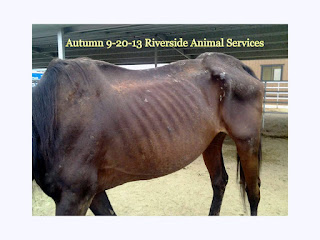 This was Autumn in September of 2013 when Riverside County Animal Services was looking for someone to take her or they would euthanize her.  Her owner relinquished her to avoid prosecution. 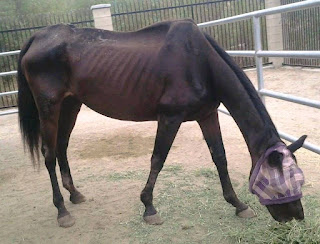 Fellow rescuer, Jen at Baker Ranch Equine Rescue had Autumn picked up and brought to her in Ramona. With her initial rehab started, 5 weeks of TLC and 100 pounds weight gain, her condition stabilized enough for long-distance travel to our rescue. The collage below was made by Jen the day Autumn left for EqWBR. 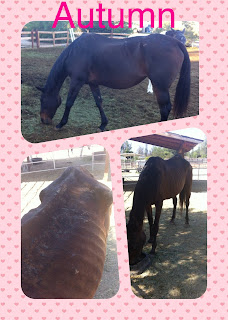 Arriving 11-1-13 and continuing her rehab, she gained an additional 300 pounds and has blossomed at 1200 pounds. Today is her three year anniversary of her arrival at the ranch.  She is a little standoffish, not really buddied with anyone but gets along with all.

Still head shy, she will has learned to enjoy a good rub of the ears and cleaning any eye boogers without needing a halter. It makes me wonder what was done to her that her immediate response is to pull back her head. She has arthritis with a large scar on her right front foot and calcification in the bones causing her to lack range of motion and uneven hoof growth.  Autumn gets Previcox for pain management, joint supplements and frequent trims to make walking easier. She is starting to show her early 20's age with gray hairs showing on her face. 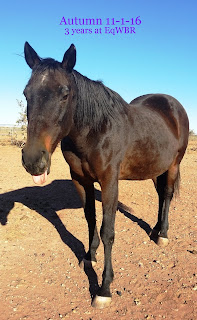 Very slow moving and gimpy she is living proof that a discarded horse can have years of happiness with a lot of tender loving care.  She loves a gentle grooming and sweet words whispered in her ears. Every once in a while she will act like a young filly again, kicking up her heels. bucking, rearing and running around, but most days she basks in the sun that warms her achy bones and just enjoys the uncomplicated life she has at the rescue.

Happy Anniversary our sweet, sweet girl.  We love you so much!

Posted by Equine WellBeing Rescue, Inc. at 6:53 AM No comments: