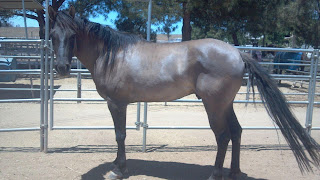 My heart is breaking and I am so angry at the same time, I can't reason this out in my mind.  How can someone bring a horse into this life and then discard him with an injury with no care in the world?  Well that is exactly what happened to JJ.

Two weeks ago I got a call from a young lady who was worried a young horse she had been working with was going to be taken to auction and end up on a truck to Mexico to be slaughtered.  She explained that he was obviously lame, but the owner still felt he could get good money for him at the auction.  She needed help and turned to us.   I asked her to offer the owner $200 and if he said yes, to just bring him here and we would take him in.

She told me that a chiropractor had seen him the week before and her prognosis was not good.  That is what prompted the owner to take him to auction.  He didn't want to pay for rehab and there was no guarantee he would ever be sound.

I waited to hear back from her and the day of the auction she called me again saying he was still planning on taking him.  We upped the offer to $300, knowing that horses were going for pennies on the dollar these days at the auction and there is NO way he would get that much with an obviously lame horse.  Again he turned her down and blew her off about any kill buyers at auctions.

She called in tears and told me with disbelief what was happening.  Knowing what his outcome would probably be, I looked at my husband and said, "I won't sleep tonight, or for many nights, if I don't go up and try to get that horse."  He offered to go with me and in that moment our plans changed for the rest of the day.

I posted a fundraiser with a few of the details on Facebook and sent it in email, in hopes that we could raise $400 to cover fuel and to out bid anyone on this horse, then off in the truck we went.  Almost a two hour drive on a blistering hot day with temps over 100 degrees, I felt bad for this horse who had to endure the ride hardly able to stand on his hind leg.

By the time we arrived, other people who are on Facebook had seen the posts were at the auction too.  They had already started telling people who were looking at this beautiful gelding that he was lame and that was why he was at the auction.  We continued to do the same with the help of our friends, Dawn and Clint, we told everyone who looked at him in hopes they wouldn't bid so we could without a bidding war.

So hard to watch the poor horse tied up to the fence with hardly room to move his head, no water and standing on the cement in the hot summer heat. What a sweet boy though, he loved having his face rubbed and people around him.   His desire for attention was unmistakable, he loved people. His beautiful grullo coloring drew people right to him.

Number 68, we had a long wait till he was called in.  So hard to watch as some horses were being sold for as little as $25. He finally came in with the owner leading him through the gate and he was wobbling he could hardly walk on his hind end.  At least the seller was honest and admitted he was lame, said it was a pasture accident that needed rehab and he just didn't want to deal with it. 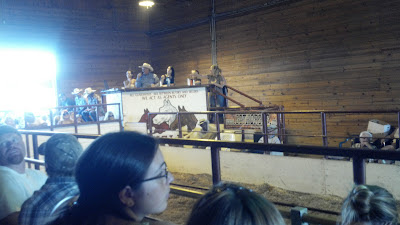 A very nice lady who knew the people running the auction had offered to help us pay for him, made several calls and told me to call her when the bidding was done. To my surprise she had left her credit card number to pay up to $200 on his bill. As I stood in the 'buyer' line I cried, still in shock that we had to come all this way to buy a horse from home and overwhelmed by the number of people who had been donating and helping to save this horse.  The emotion of it all had finally caught up with me.

With papers in hand, Lary went to get the horse from the stall. The seller was there and said, "should have left him at home, I got a $300 offer from someone at the ranch".    Didn't ask or care what we were gonna do with him, just realizing he didn't make as much money as he thought.  After all his fees were paid, he only got about $100 for him.  We didn't mention that we were the ones who had offered the $300 through the person at his ranch.

Before we loaded him on the trailer we gave him some pain reliever knowing it was another long two hours back to Ramona and lots of bumping around in the trailer.   It was almost midnight by time we got home.  He unloaded and settled in for the night.  The next morning he was checking out the other horses and getting used to his new surroundings. 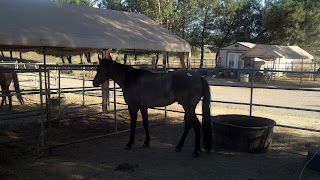 A little on the thin side we started him on some feed and supplements.  Because he had been at the auction we had to quarantine him from the other horses, just in case he picked up any germs from viruses like strangles while in their pen.

JJ had several visitors his first week here, including the lady who called me about him in the first place.  She was over his first day here.  Her love for him was obvious as the joy on her face when she laid eyes on him.

After a week, he showed no signs of virus so I called the vet to come take a look.  The lady offered to come for the lameness exam and tell the vet everything she knew and to hear what he thought could be wrong.  Dawn came too so we could all see together what was going on.

Even with all the rest and pain reliever he had been given, he was still not putting weight on his right hind in the stall, maybe for a few moments, but most of the time he stood with it cocked.  When the vet tried to lift up his right hind not only did he try to kick out, but his left hind started the shake and it was clear he was in pain.  We were told they had trouble trimming his feet because he couldn't pick it up without pain.

Through the series of normal lameness tests, it was clear that thing weren't looking to good.  Not knowing exactly what happened to cause the issue made no difference at this point because the result of a year with no treatment was painfully obvious.   Was it from kicking the fence, casting himself, fighting with another horse?  Didn't much matter at this point because the damage was done. 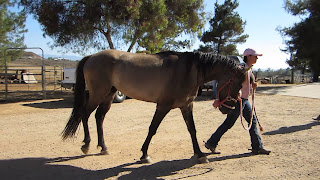 click for video of JJ's walk from the side

The news wasn't good.  Here is what the vet wrote,  "The rescued horse JJ was evaluated for chronic hind limb lameness, upon examination JJ was grade 4/5 lame in the right hind.  With any manipulation of the upper aspect of the right hind, JJ winced in pain.  During movement he could not bring the right hind limb forward past vertical.  It was suspected that a pelvic fracture or injury may be the cause of the chronic lameness, so a rectal exam was performed.  Rectal examination revealed that the pelvis was off set at the pelvic symphysis with a small calus.  This rotation of the pelvis can not be fixed and humane euthanasia was recommended due to the persistent pain. 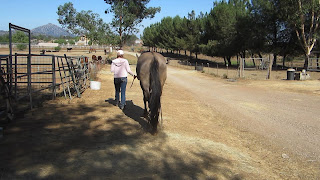 At approximately 11am this morning, after a bucket of wonderful grain. The lady who called me two weeks ago, held his head in her arms and hugged him with tears in her eyes.  I said a prayer for his release from pain and when we all shook our heads the vet did one of the hardest things they do in their job, he put him down. We all had tears in our eyes as we watched him pass, this sweet horse that loved people even after some had failed him miserably.  He went peacefully and with dignity, being loved to the end.

This is hard, so very hard and I cry as I write this because it hurts.  After going to such lengths to save this horse from the kill buyer, we had to do what the seller wouldn't be responsible enough to do himself.   Nope, he wanted his $100 and to let someone else deal the problem he wouldn't.   I am mad and I just want to tell him how utterly selfish he was, but a person like that would never hear the words.

We are linked in time, this lady who called me two weeks ago for help, my husband and friends who went to the auction, all those who donated to help JJ with what ever he needed and we four who stood with tears in our eyes and let him go on to a heaven where there is no pain.   We are all linked by the love we all felt for this beautiful boy, even if it was for such a very short time.